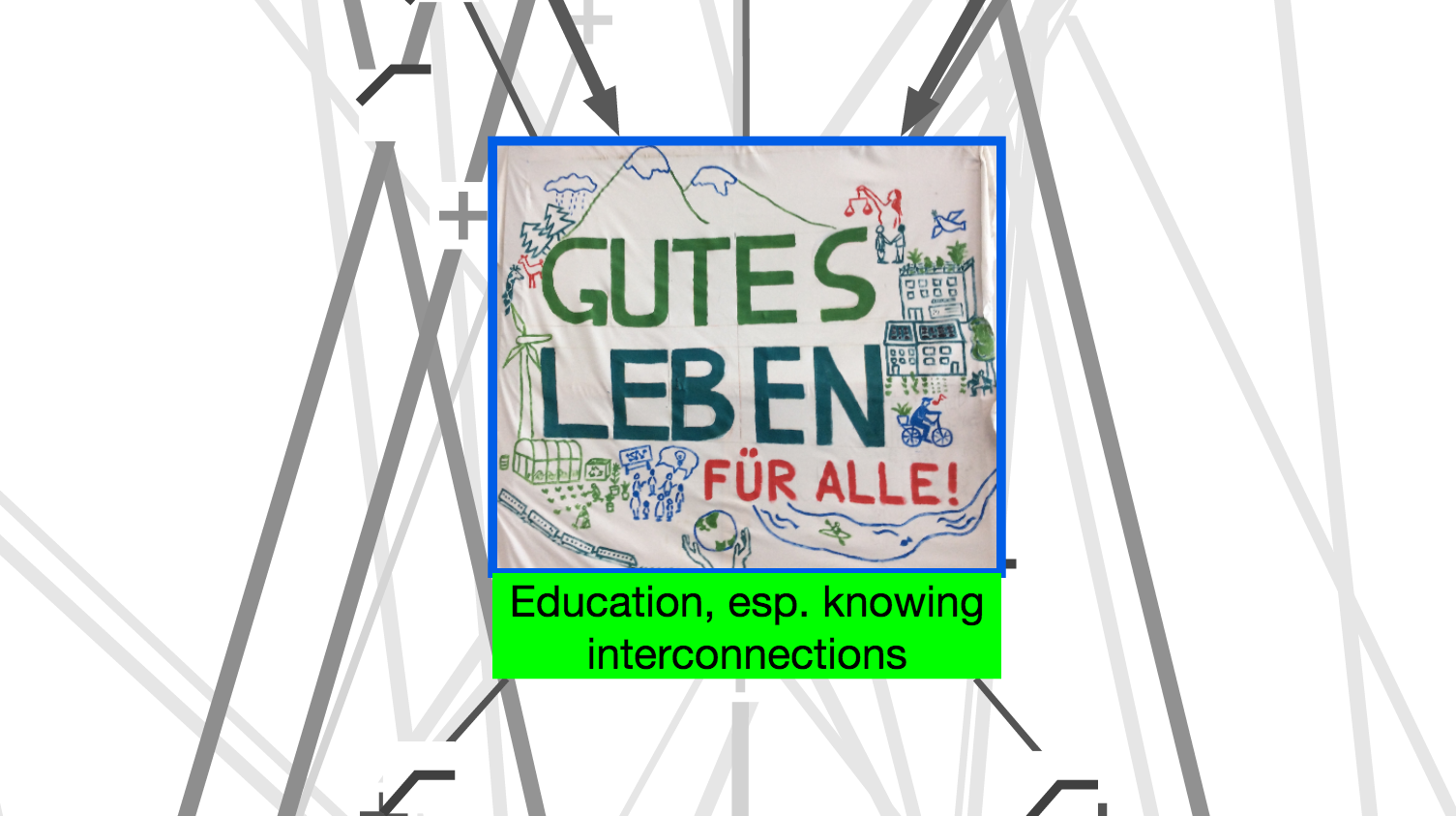 This picture by unknown artists I have discovered at the international degrowth conference 2014 in Leipzig. It shows next to the well known measures towards a good life for everybody a group of people in front of a cause and effect model gaining insights and developing ideas. Accidentally there is a factor for this in this model and the insight matrices show its meaning. 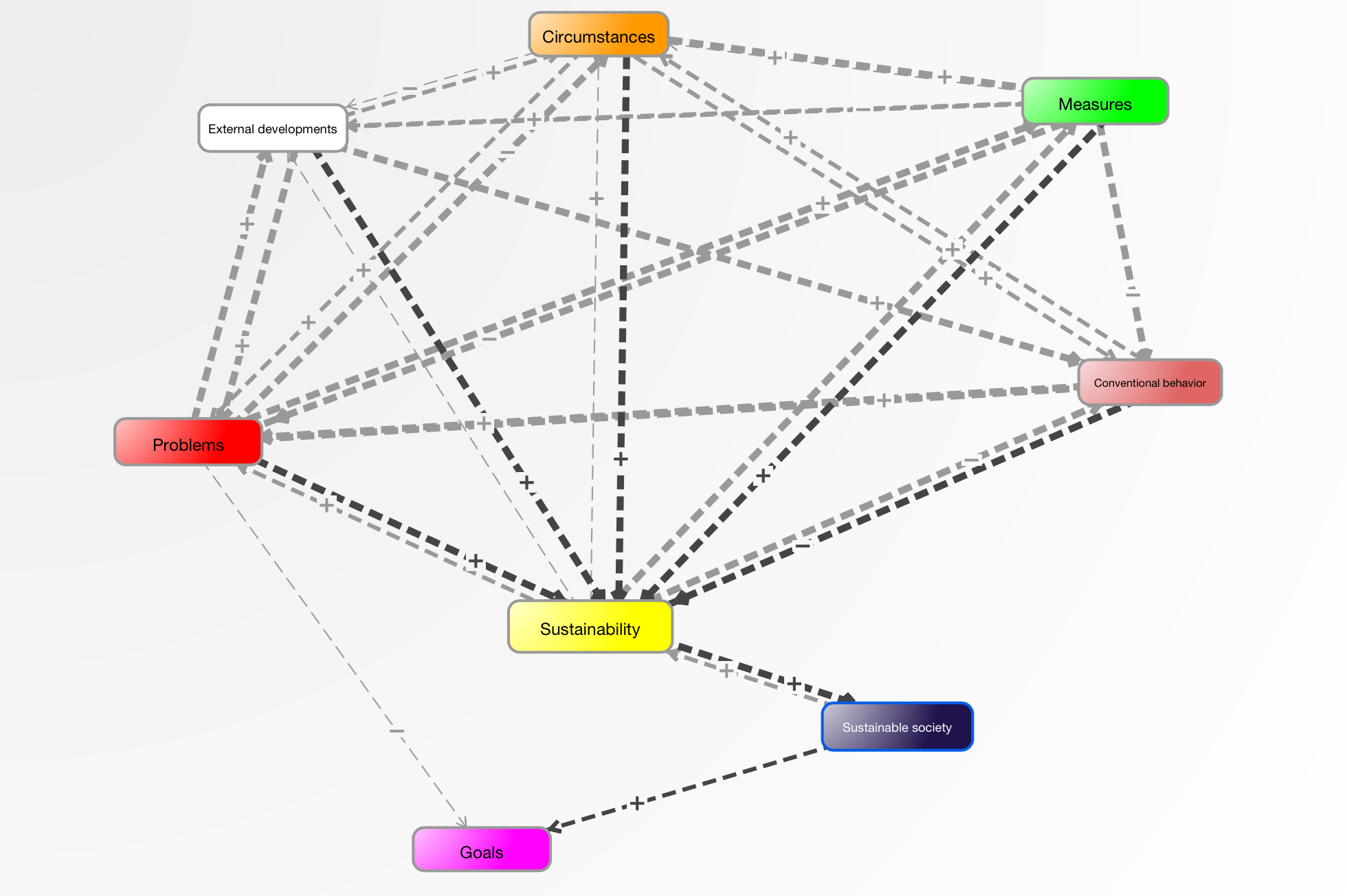 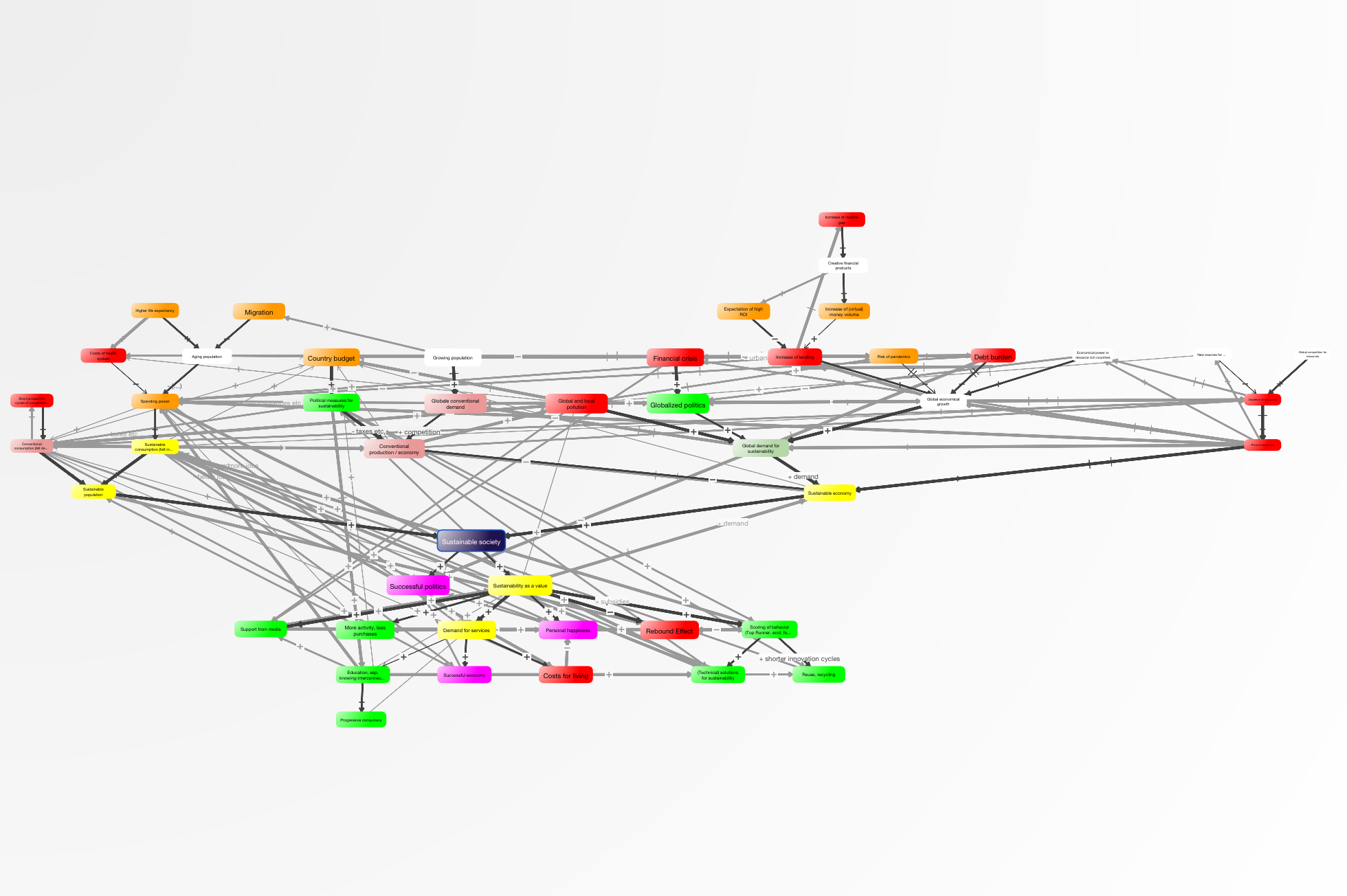 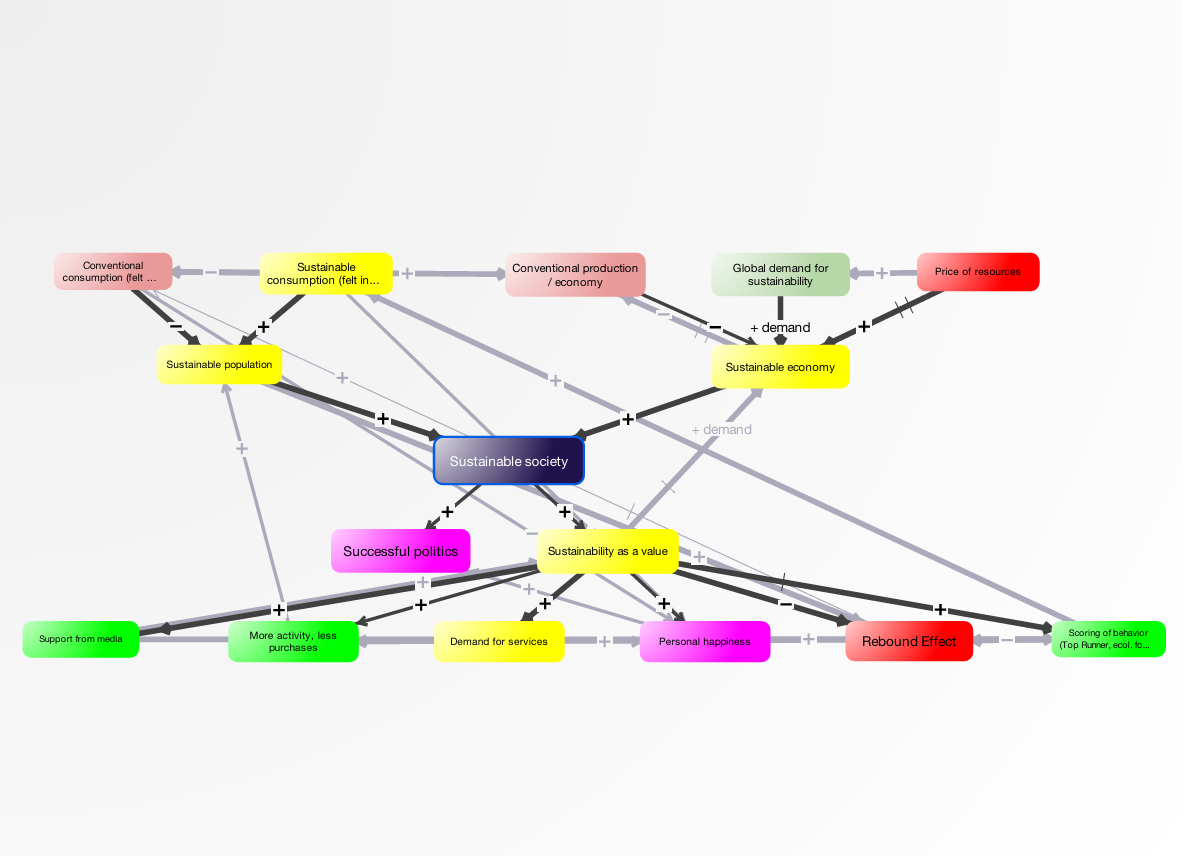 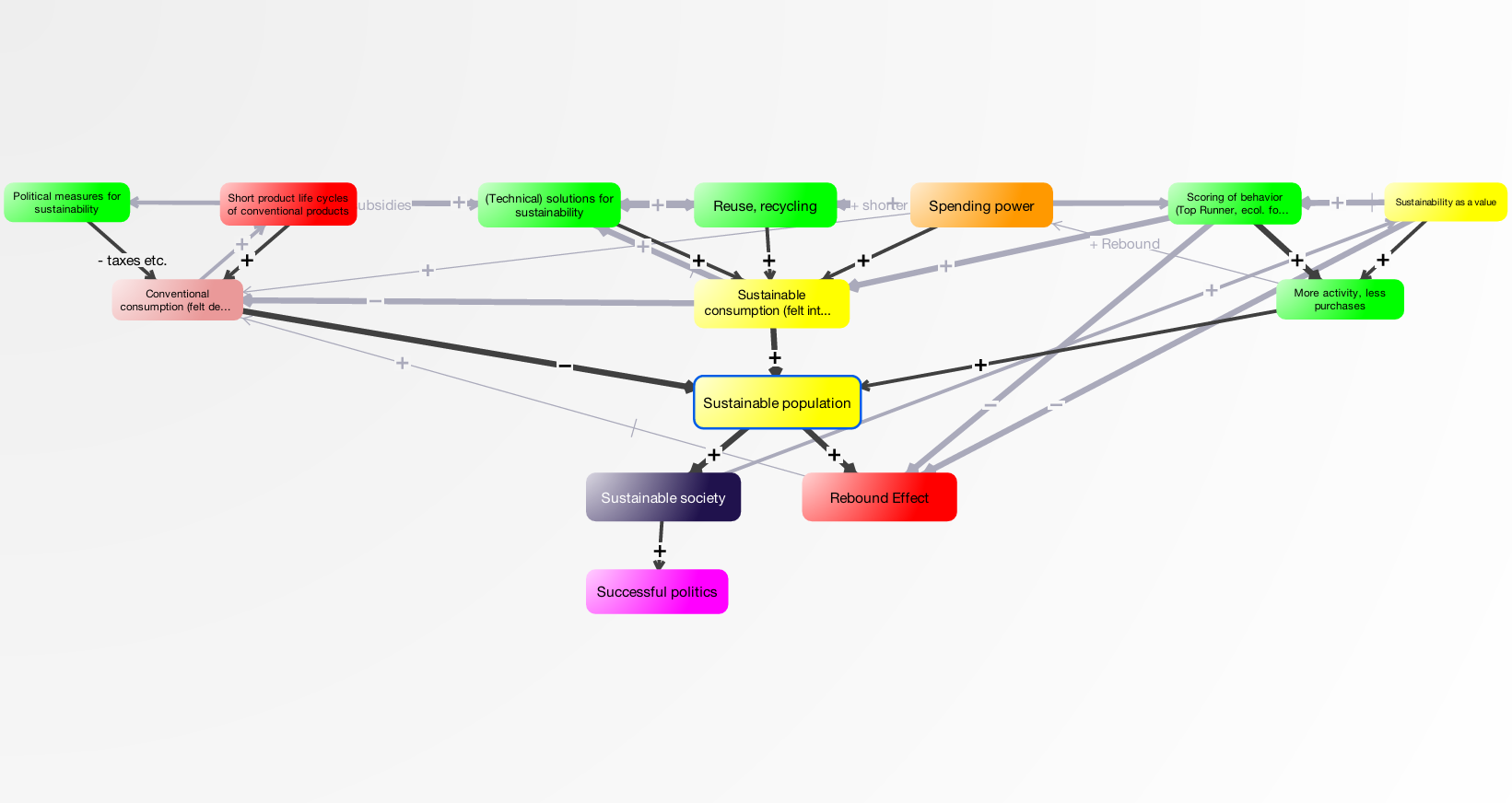 ... changing the perspective to the factor "Sustainable population" ... 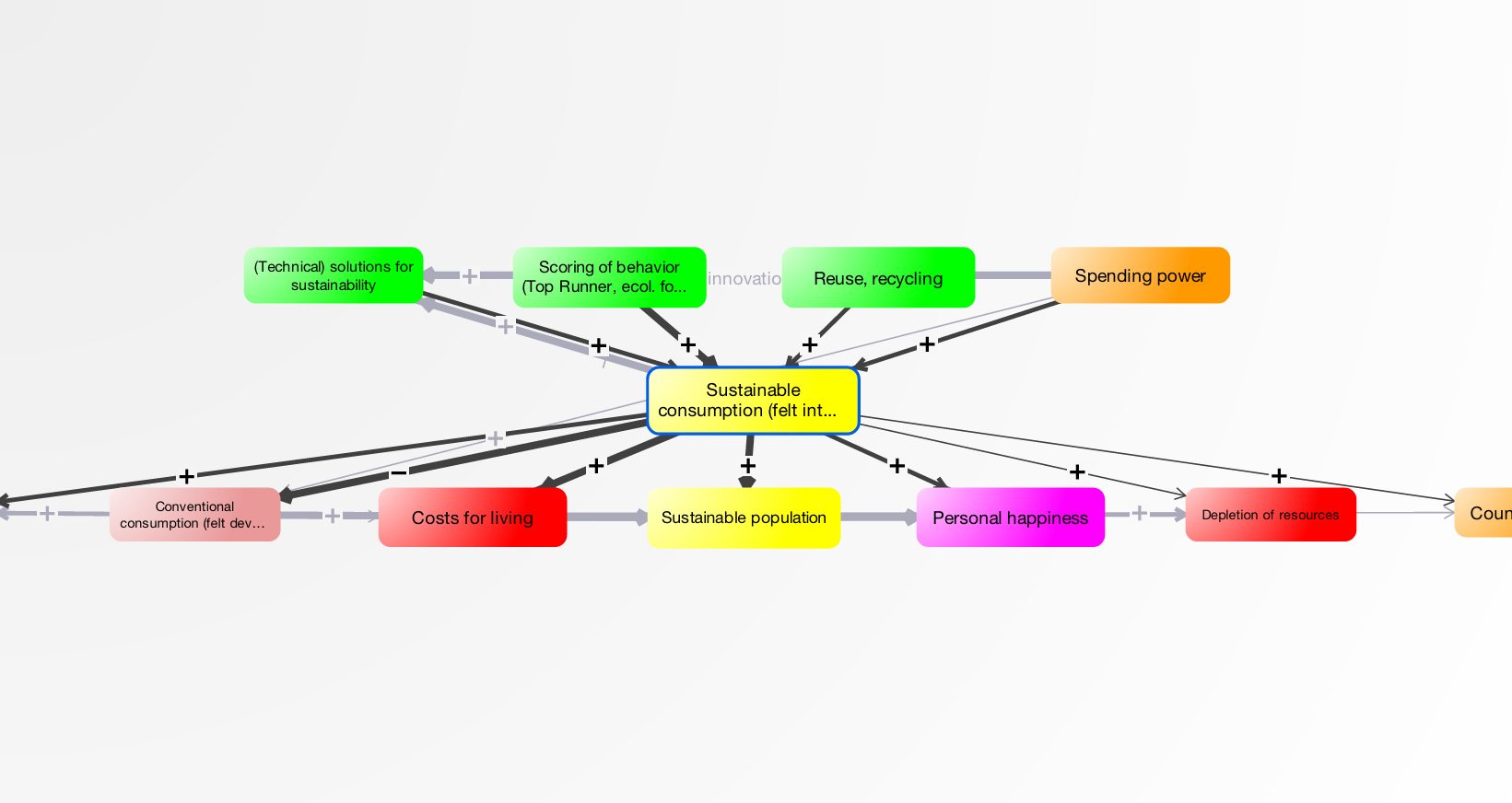 ... changing the perspective to "Sustainable consumption (felt integration and development"*, showing only the first level...

* felt integration and development is a very important aspect as the main driver for our conventional behavior is the good feeling (according to KNOW WHY Thinking) that it gives us, so in order to be given up in favor for more sustainable behavior sustainable consumption needs to be designed to feel good! 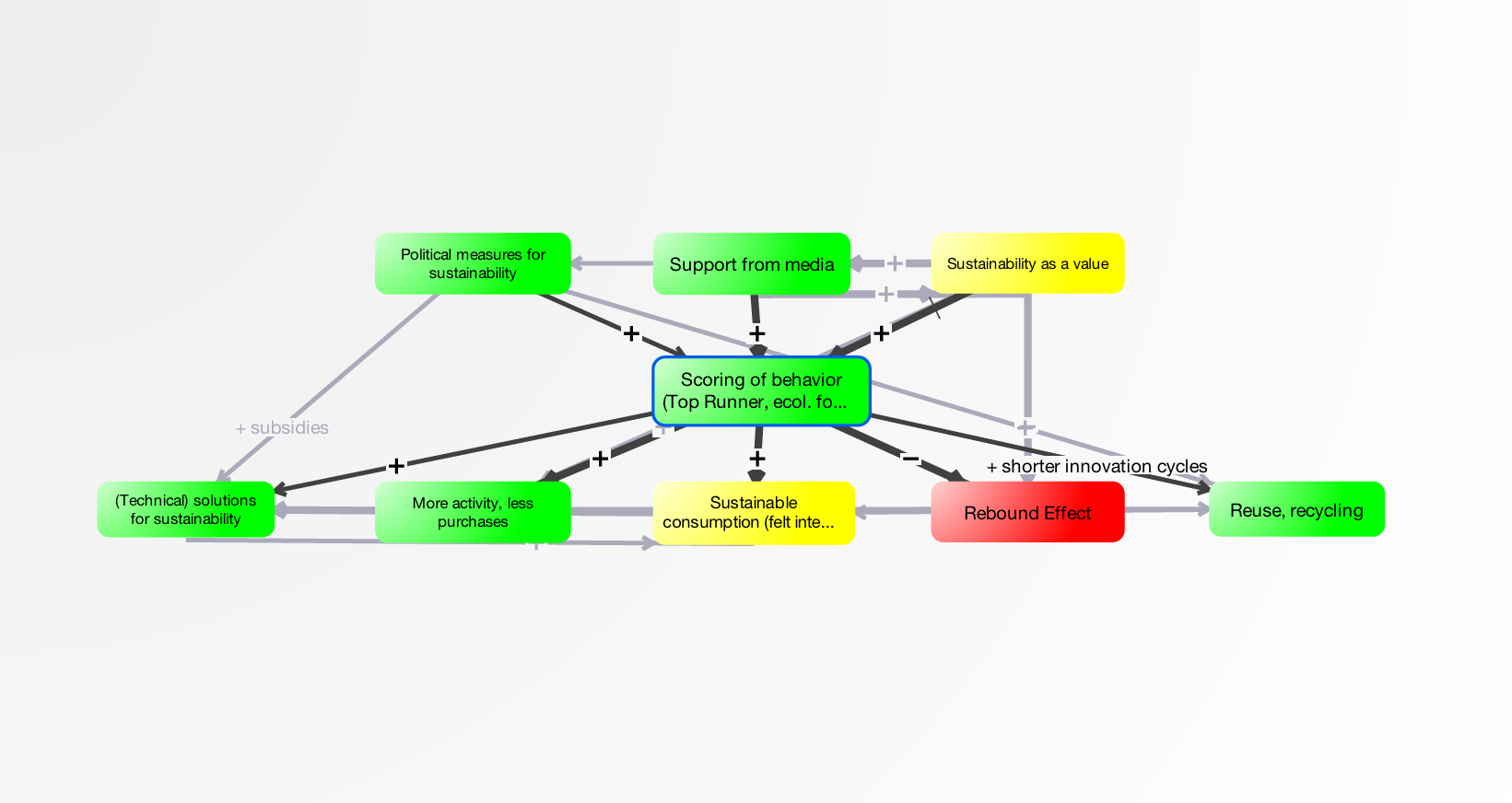 ... changing to the perspective of "Scoring of behavior...", a very effective measure to let people feel better in choosing sustainable consumption or even no consumption ("More activity, less purchases") when they can compete with others and challenge themselves through continued improvements. A feeling solely based on the rational knowledge that sustainability is a the better choice is almost impossible. We can understand this if we reflect on human motivation (KNOW WHY Thinking) and understand our social dependencies. ....

Model from perspective of factor Political measures for sustainability 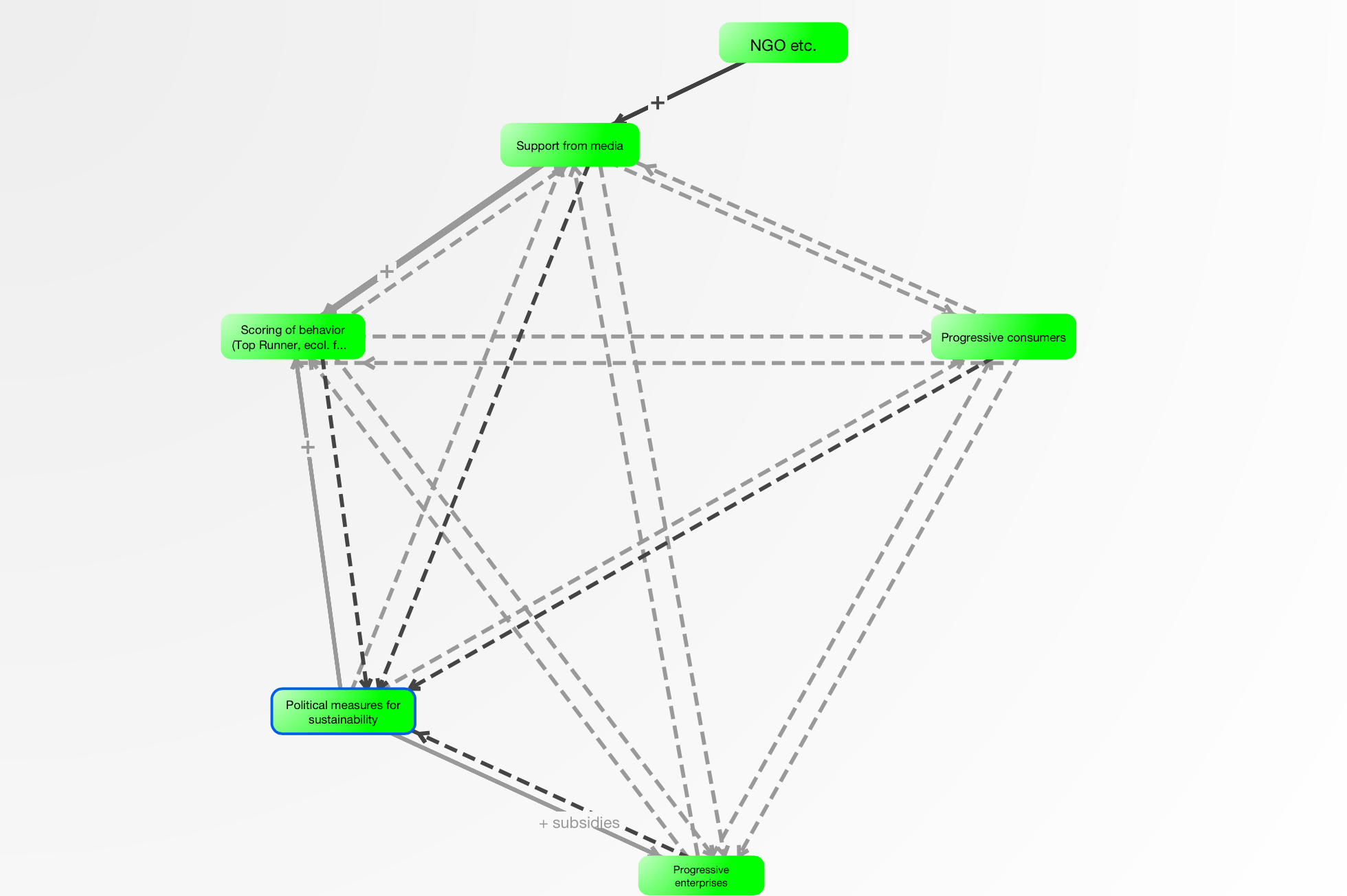 This perspective (all other factors filtered out) shows how the players (politics, consumer, economy and media) depend on each other which makes it hard for first movers as long as conventional behavior simply feels good. We have a lock-in situation that currently prevents a transition.
Politics waits for the voter, the media and maybe even the economy. The economy waits for the consumer, politics and the media. The media waits for the economy and the consumer. Well, and the consumer waits for the economy, politics, media, and most important for her or his neighbour. While politics would be most effective the consumer is the most powerful change agent in this lock-in situation to trigger virtuous feedback loops.
Thus an intelligent system for the scoring of our behavior could trigger a crucial change (...) 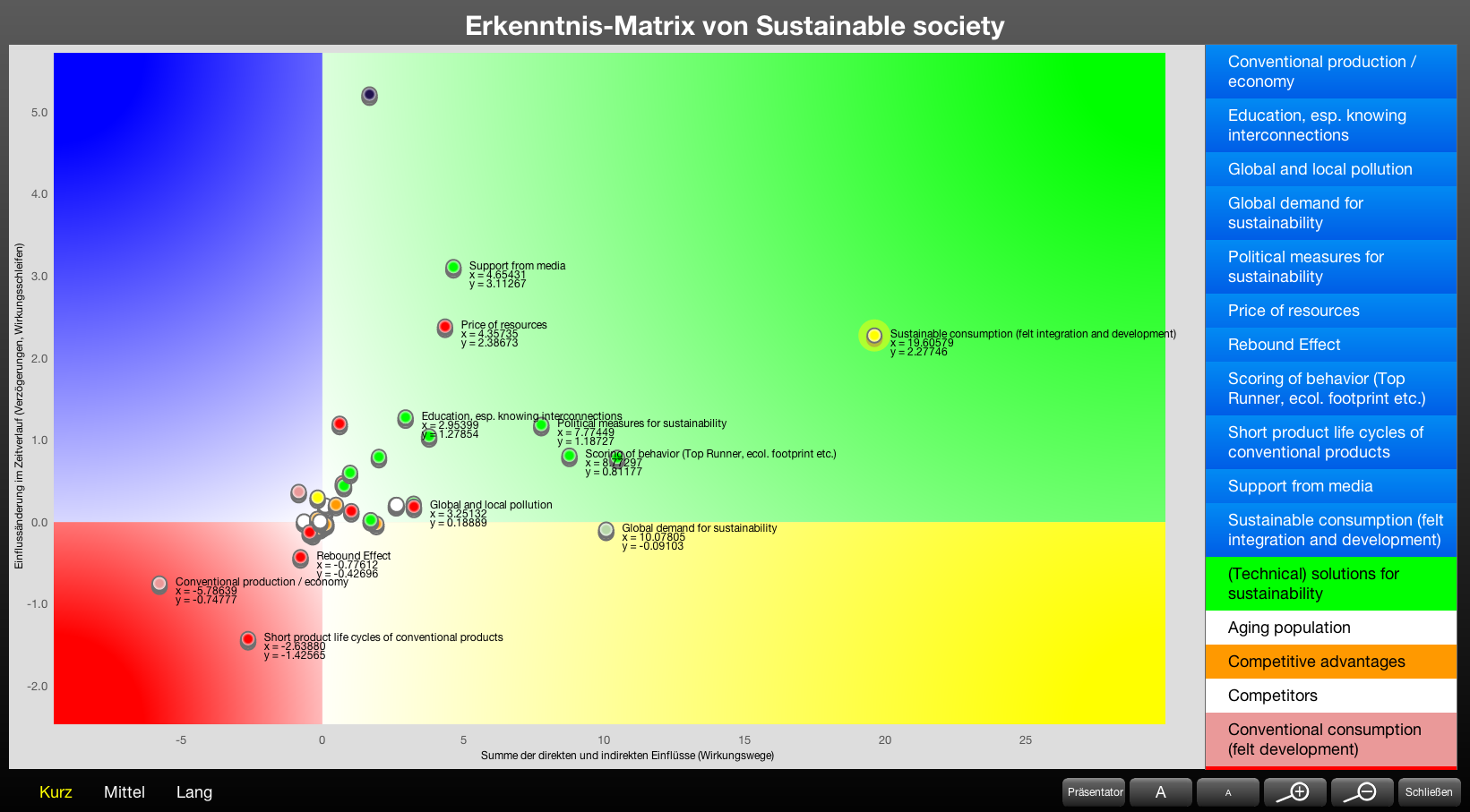 An example for the many possible insight matrices and selections of factors that can be compared. The horizontal axis shows how comparably effective for example the green measures are or how critical the red risks and problems seem to be for the chosen factor. The vertical axis indicates how the impact of factors changes due to feedback loops and delays.
Notable is the factor ... knowing the interconnections.... It is the basis for a number of measures, a vision that accompanies change and eg. the scoring system.

Model from perspective of factor Support from media 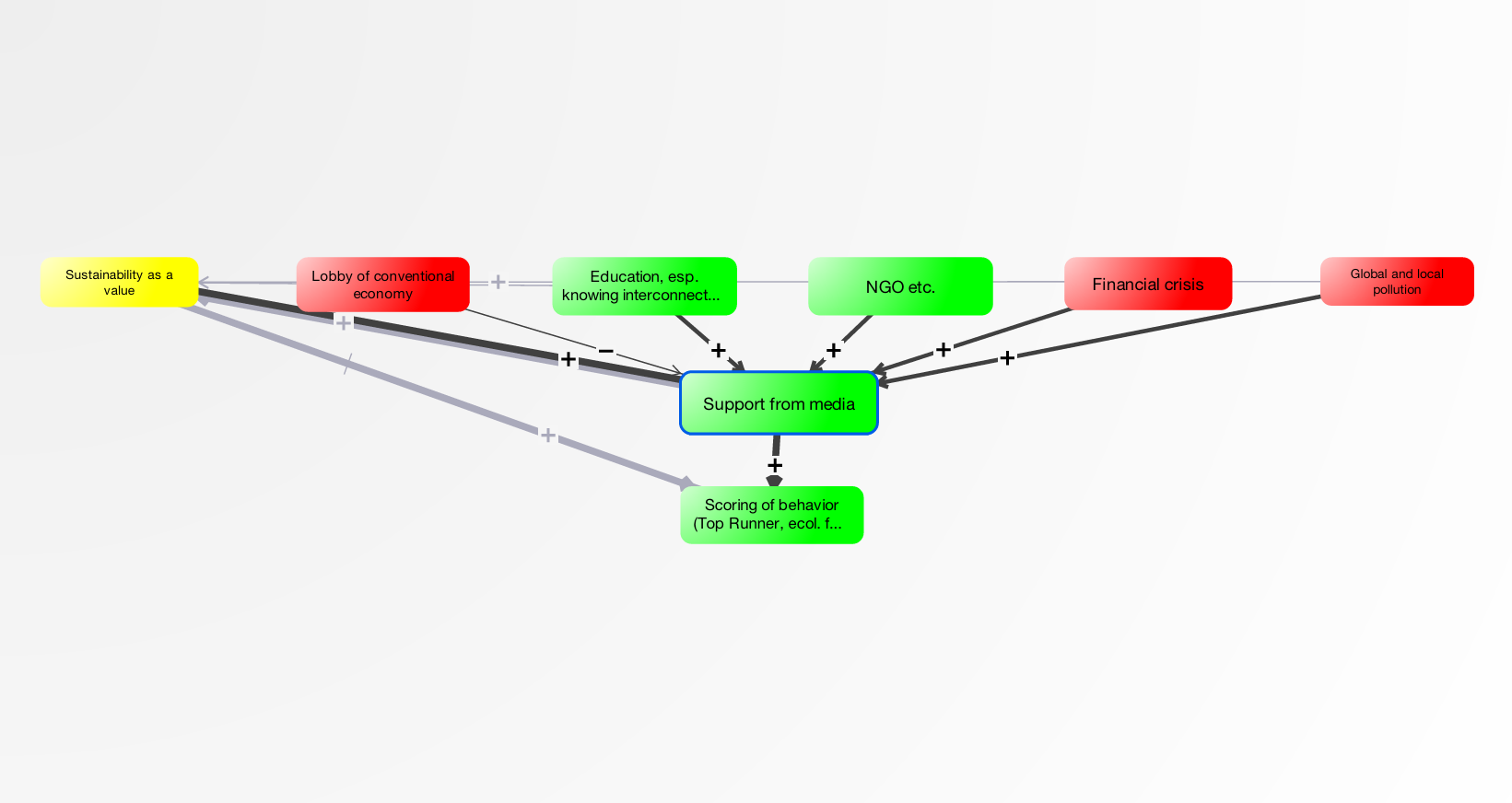 ... as a final example the model from the perspective of the factor "Support from media". Choosing perspectives and showing just one or two levels of connections makes it possible to handle and navigate through models consisting of even thousands of factors and connections. It works just like our brain where we also start any thought, association or argument from one starting point. 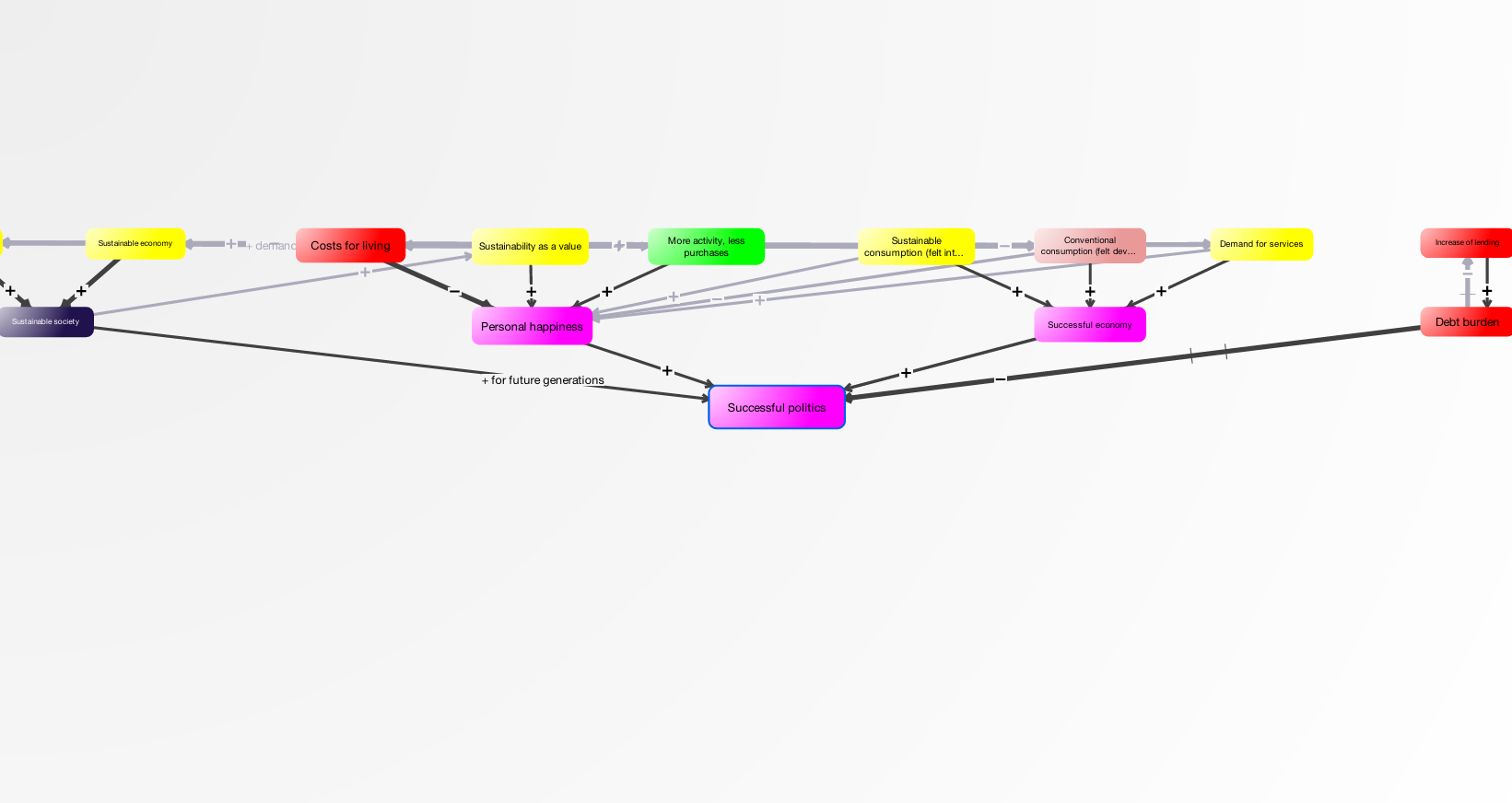 The holistic model not just allows to see what is important for a more sustainable society, it also allows to see how other targets like successful politics, successful economy or personal happiness are influenced. 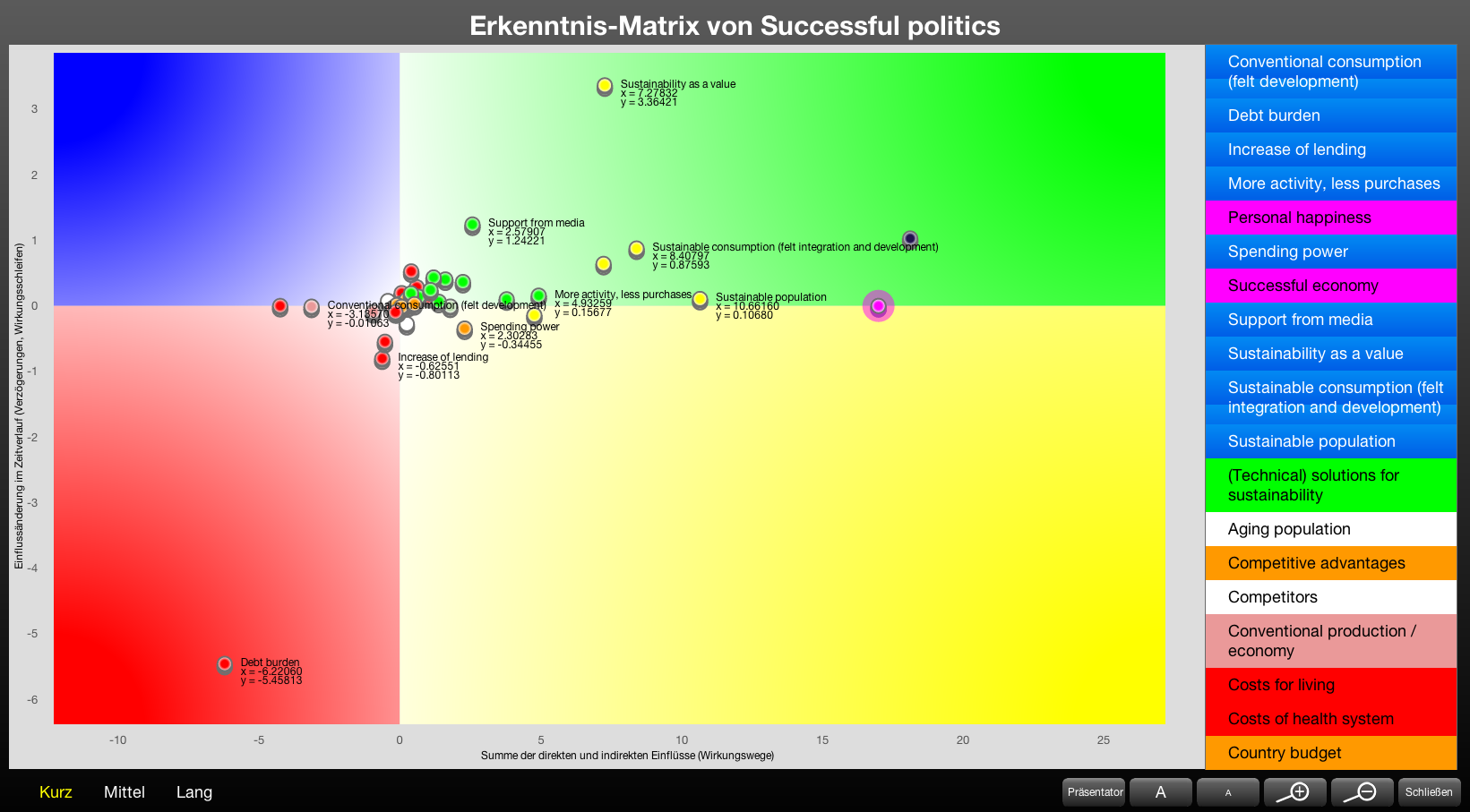 The matrix for successful politics shows that conventional consumption seems to have a negative impact as for several reasons systemic sinks cause costly damages, an increase of prices for resources etc. and hence a loss of spending power .... 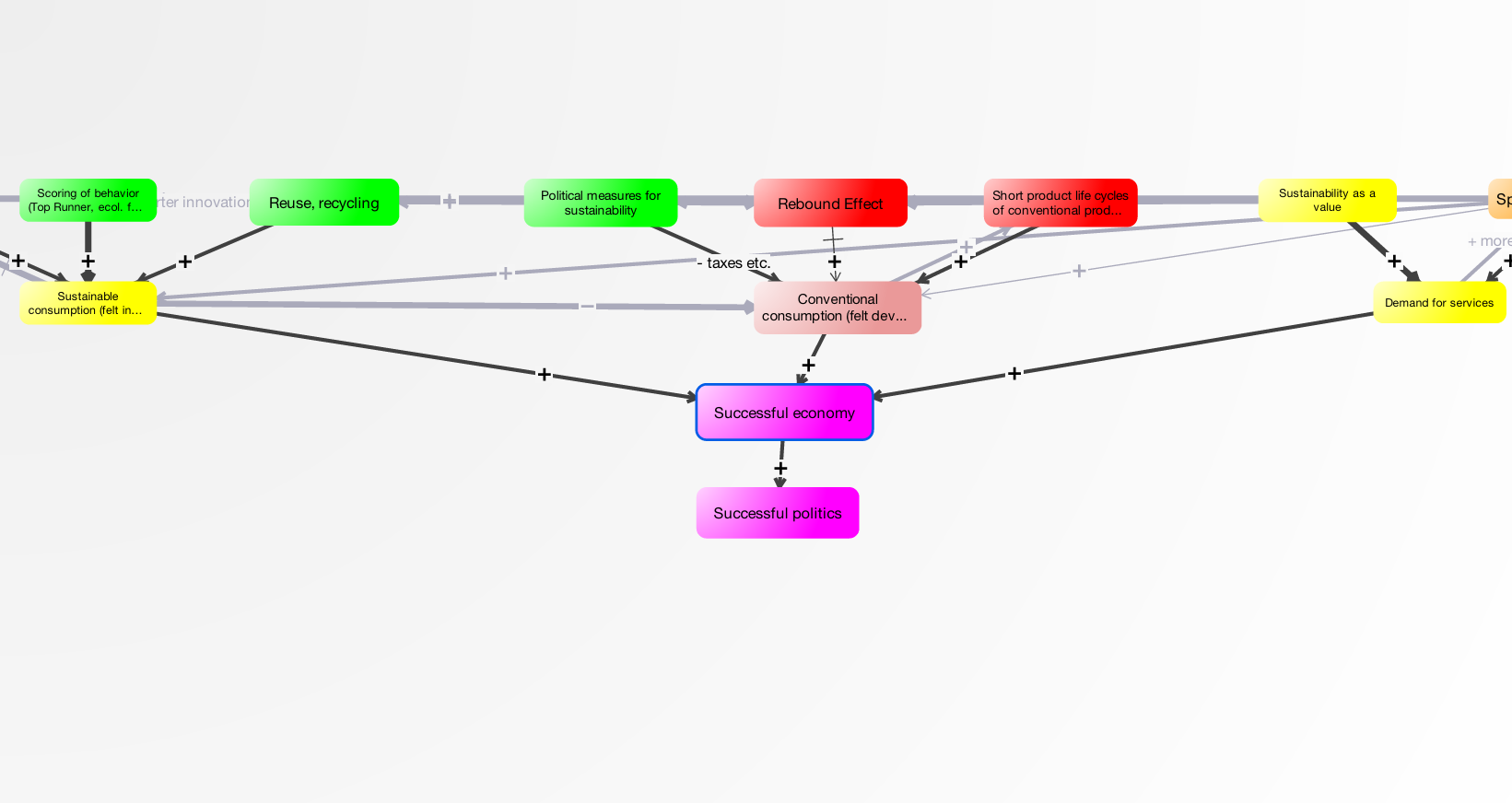 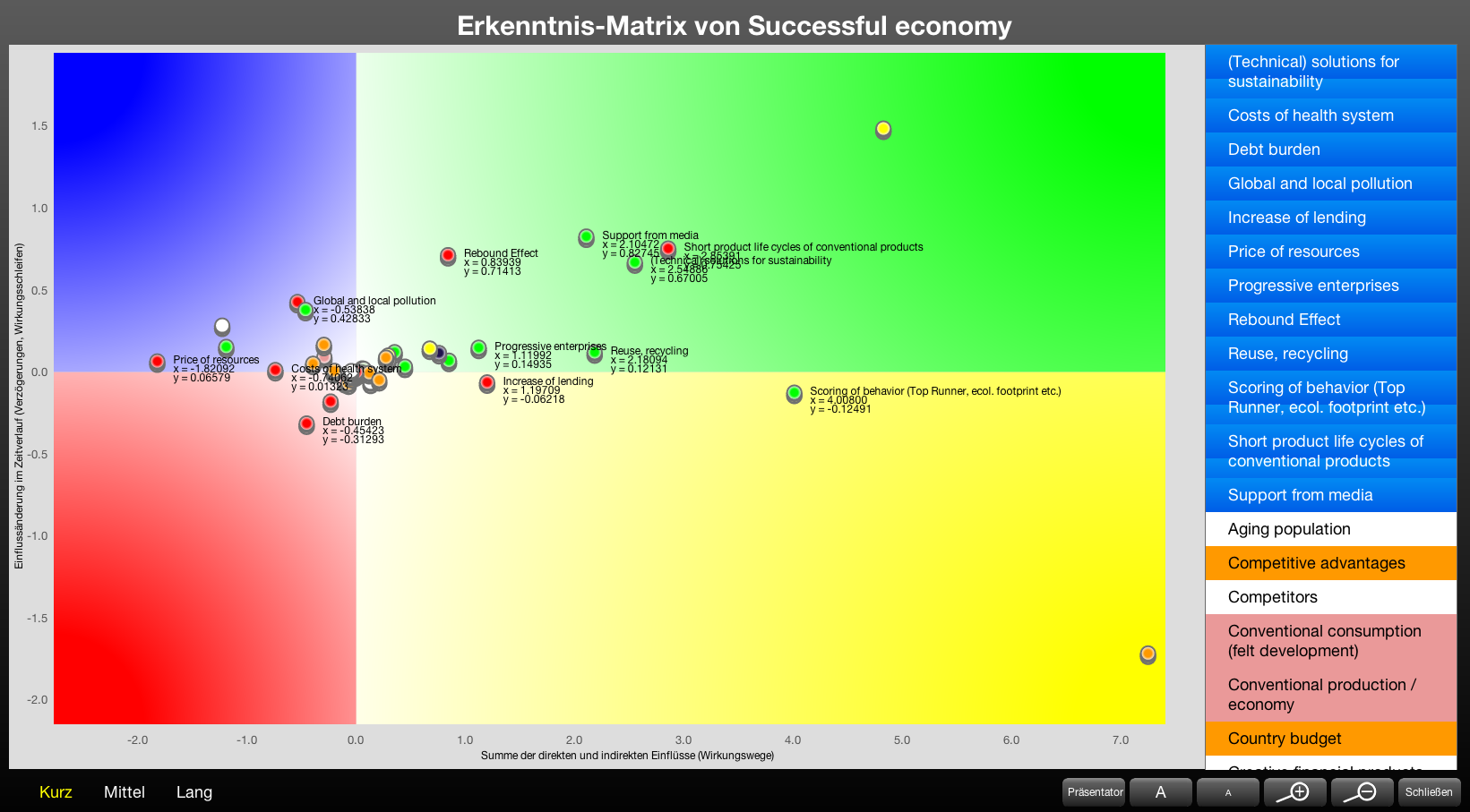 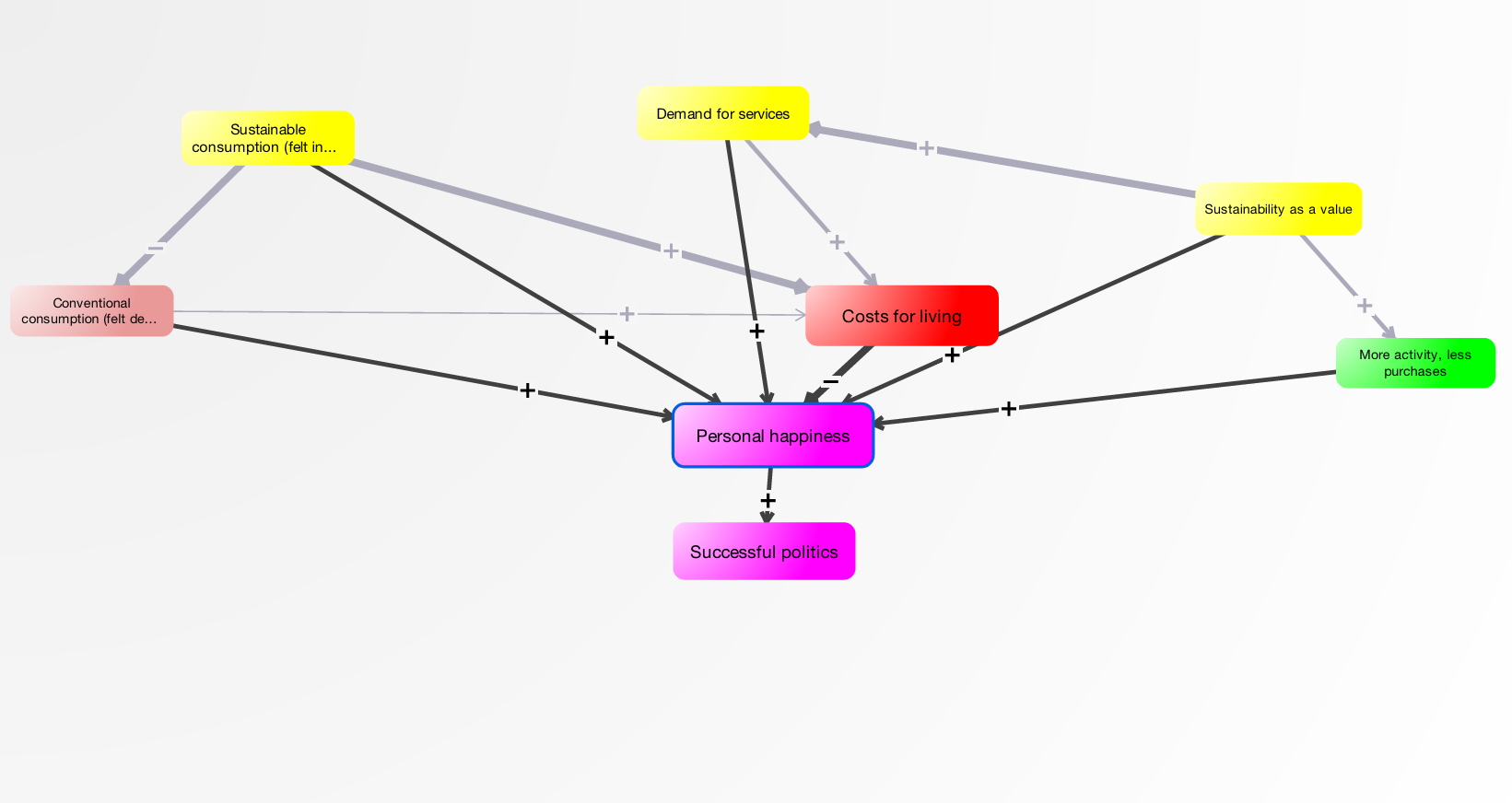 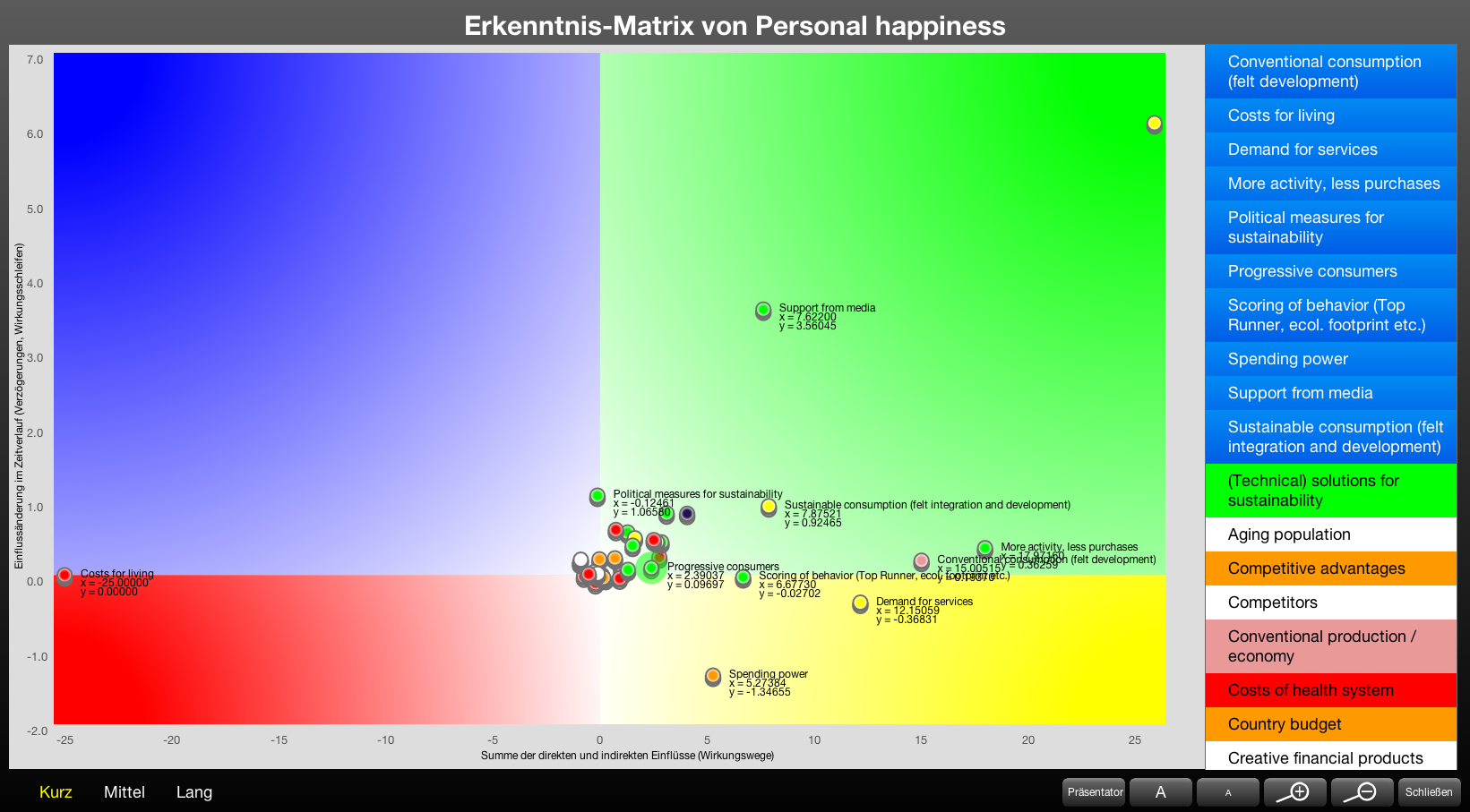 Short term conventional products make happier than sustainable products. They are cheaper. Long term however this might with the support from media shift ... 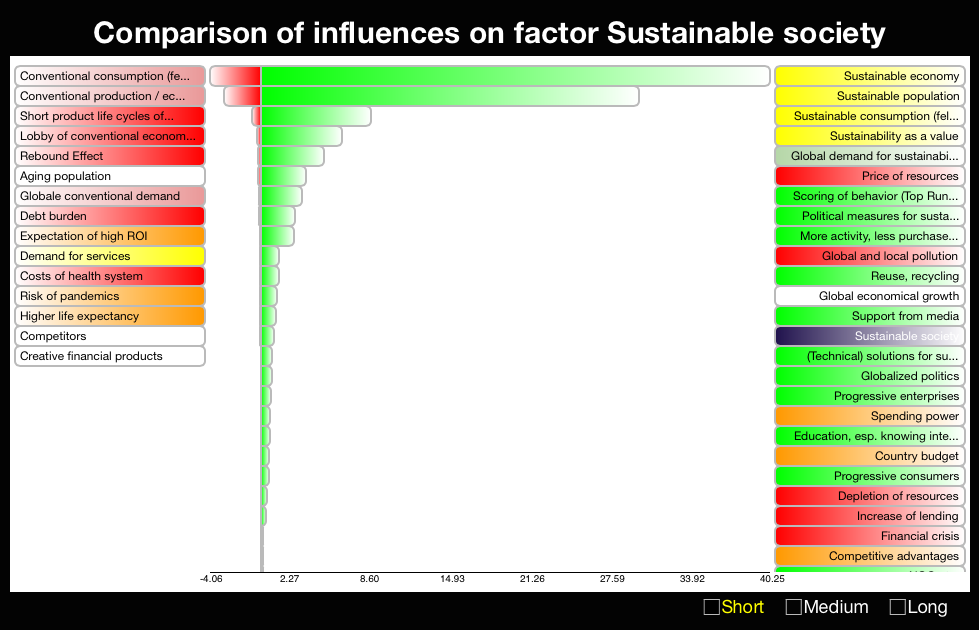 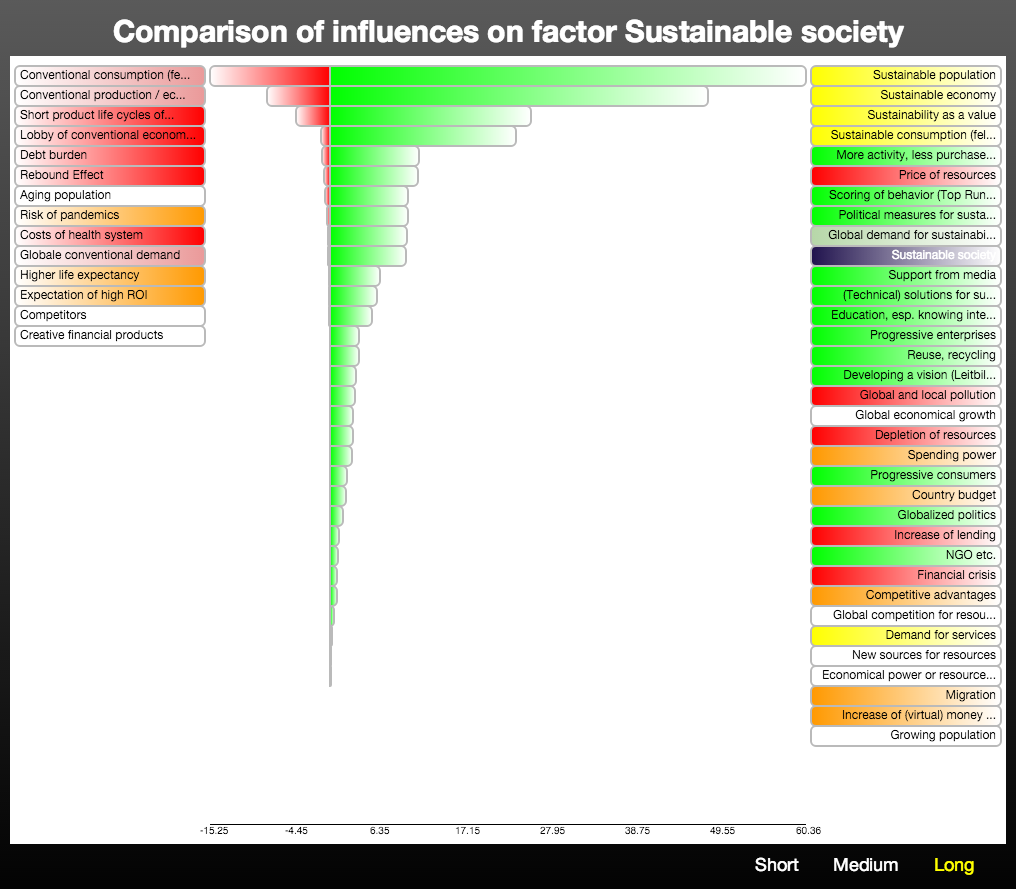