In the following sections, we would like to explain different system archetypes, which are describing common patterns of behavior in all kind of organizations or systems. For this, we are using simple examples - mainly based on the work of Peter Senge (Literature: Peter Senge et. al., The Fifth Discipline Fieldbook, 1994).

Peter Senge documented the most common set of patterns of behavior in organizations that have the tendency of reoccurring. These patterns almost always result in negative consequences due to mismanaging complex problems. Maybe, you will catch yourself by studying these patterns :-)

In the overview of the model you will find the most common set of system archetypes structured as clusters in a family tree. To open a system archetype, please select one archetype after opening the menu - view - filter/cluster.

But, please let's take a look first at the summarized results below.

Model from perspective of factor Cash-out

More examples: subsidies; removing stress by consuming alcohol, nicotine and other drugs; increase in productivity by pressure to perform.

New loans should help to prevent a cash-out (see balancing loop above). This measure reduces the pressure to reduce the deficit as a fundamental solution. By doing this, the deficit will persist (10.000 EUR per time unit, e.g. year) ....

Model from perspective of factor Cash-out

.. or even increase exponentially due to the side effects (compounded interest). 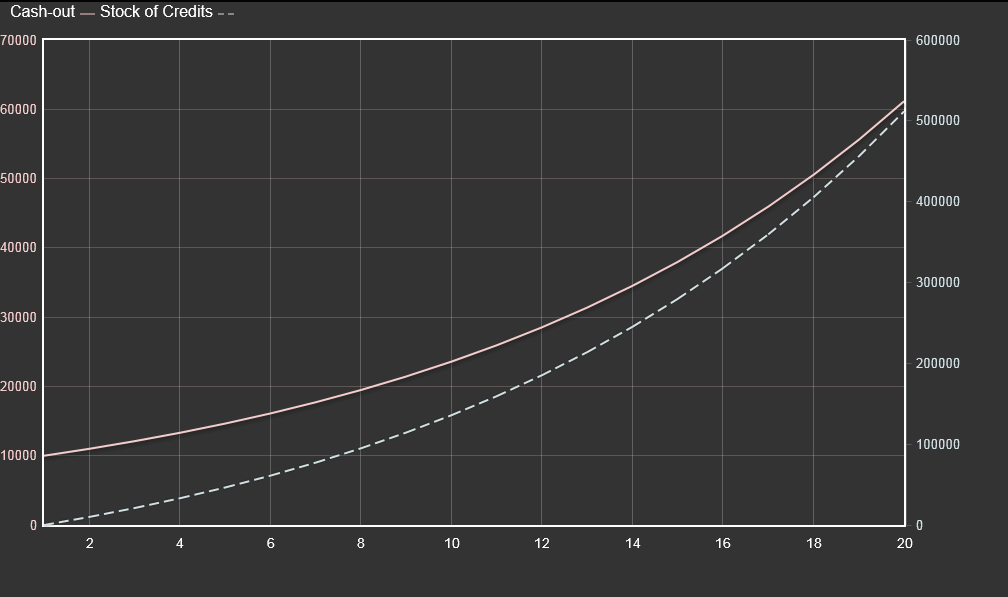 Model from perspective of factor Shifting the Burden

System Archetype "Shifting the burden to the intervenor - phenomenon of learned helplessness (I can´t do it) and psychological reactance (That's too deep for me)" - short description:

This archetype states that a problem can be managed by using external experts or by enabling internal staff members.

It hypothesizes that once external exerts are used, it alleviates the problem symptom and reduces pressure to implement a fundamental solution (enabling internal staff members), a side effect that undermines fundamental solutions resulting in a higher dependency on external experts (e.g. management consultants). 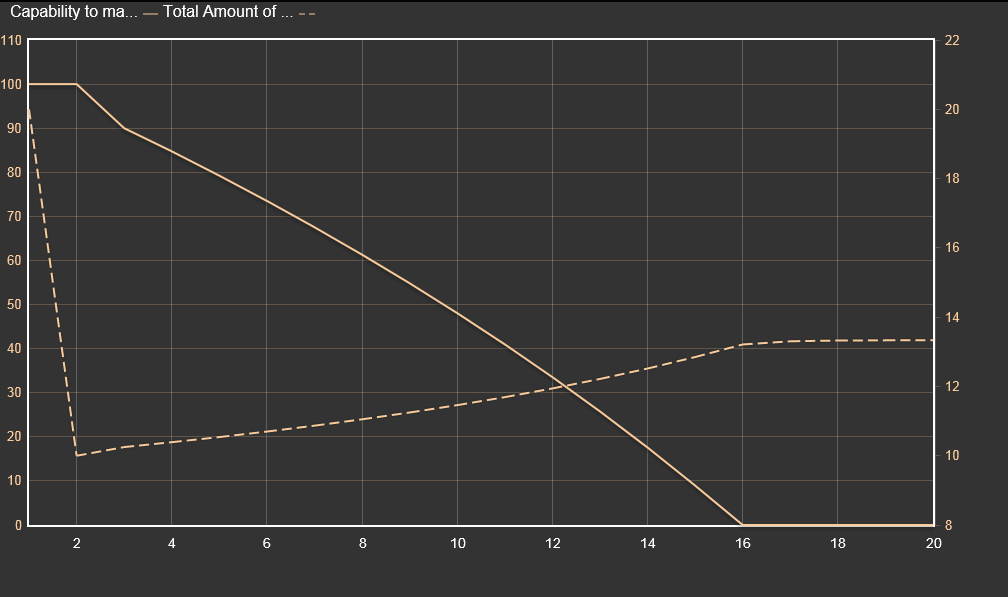 The figure above demonstrates a decrease of capability by using external experts in most cases (75 %) instead of enabling internal staff members.

Model from perspective of factor Shifting the Burden

Focussing on the strategy "enabling internal staff members" will be more efficient in a medium and long-term run ... 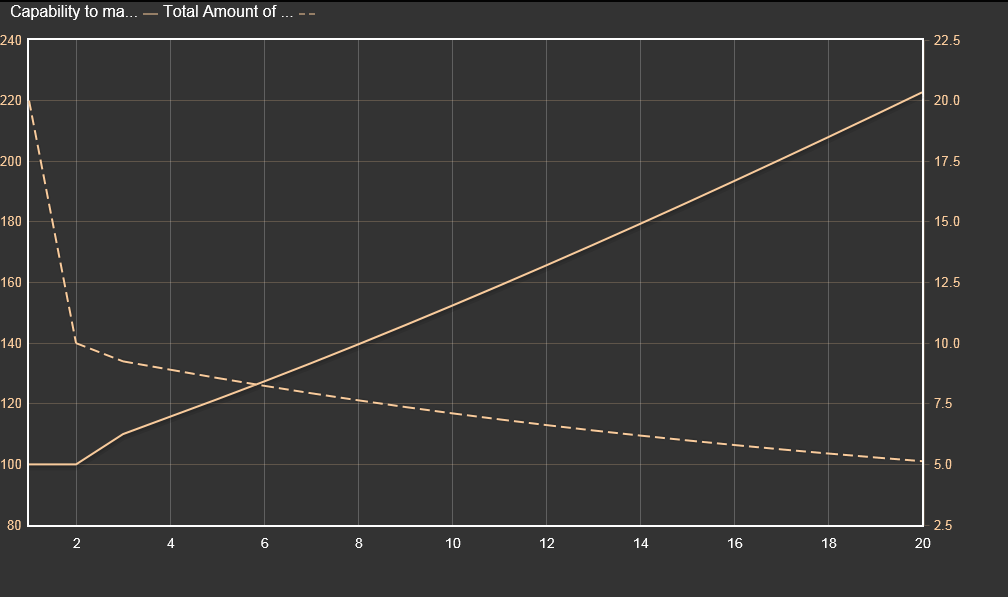 ... resulting a higher capability to manage challenges and a reduction of the total amount of tasks after 20 simulation steps.

Model from perspective of factor Stock of Failures (Bugs)

When managers find themselves saying, “I thought we fixed this - why is it worse than it was before?”, the Fixes that Fail archetype may be at work in the organization/system. This archetype states that a quick-fix solution can have unintended consequences that exacerbate the problem. 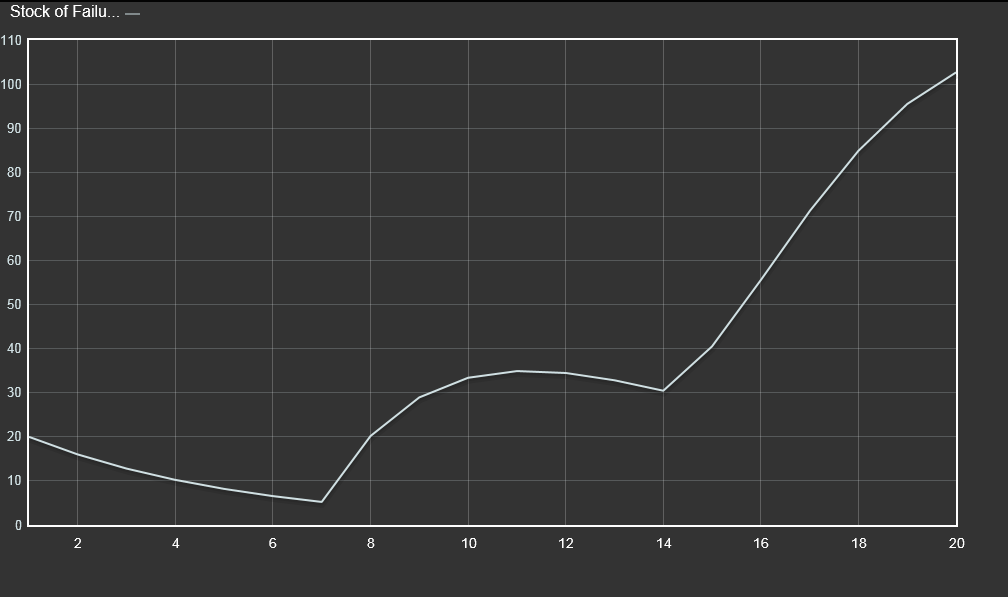 It hypothesizes that the problem symptom will diminish for a short while and then return to its previous level, or become even worse over time.

Model from perspective of factor Growth and Underinvestment

This archetype applies when growth approaches a limit that can be overcome if capacity investments are made. If a system is stretched beyond its limit, it will compensate by lowering performance standards, which reduces the perceived need for investment. It also leads to lower performance, which further justifies underinvestment over time. This archetype builds upon Limits to Growth by explicitly addressing a firm’s need to invest in its own resources, capabilities and core competencies. A growing action seeks to stimulate and reinforce demand while the firm’s current performance level may behave as the limit to its growth.


Results of our example:

Needed investments will be delayed (3 simulation steps) by a company (see red arrow above) ... 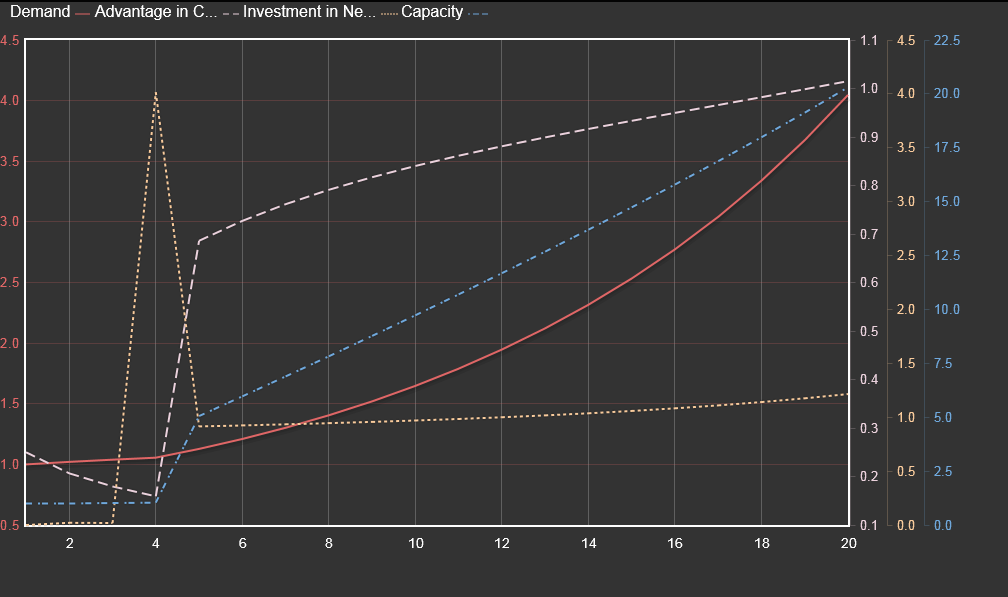 Model from perspective of factor Growth and Underinvestment

This lower performance can be prevented ... 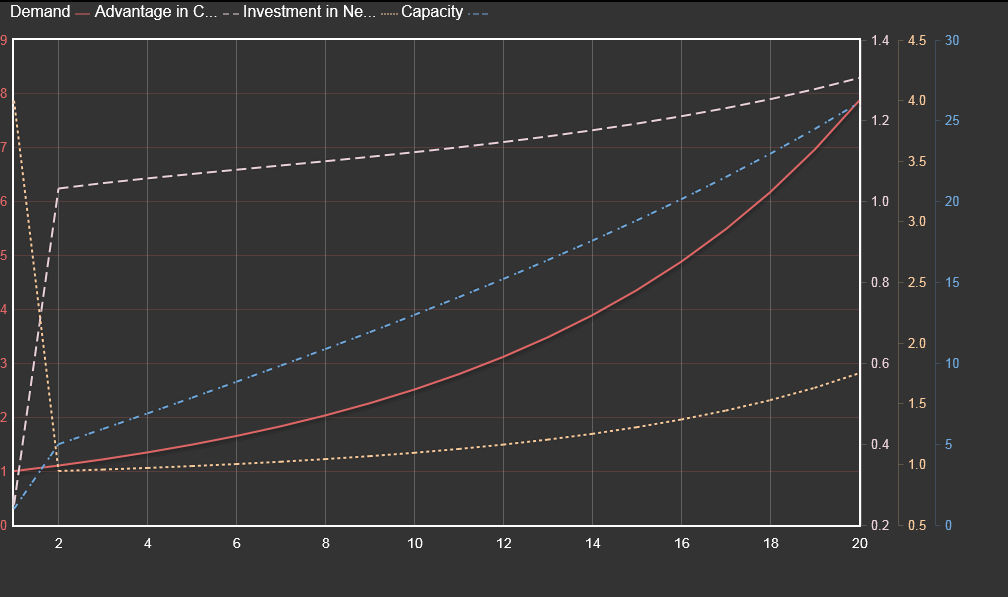 Model from perspective of factor Balancing process with delay

This archetype explains the system in which the response to action is delayed. If the decision makers do not perceive the delayed feedback, they might overshoot or underestimate the requisite action in order to reach their goals. This could be avoided by being patient or by accelerating reactions of the system to realized measures.

We often encounter this archetype in macroeconomics, which is why RBI waits for at least four months to evaluate the effectiveness of a monetary policy. Fiscal policies have even a longer time lag.

More examples: cause and effects produced by commodity production systems (Meadows, 1970) or by delayed inventory systems, as simulated with the Beer-Game (Sterman, 1989). 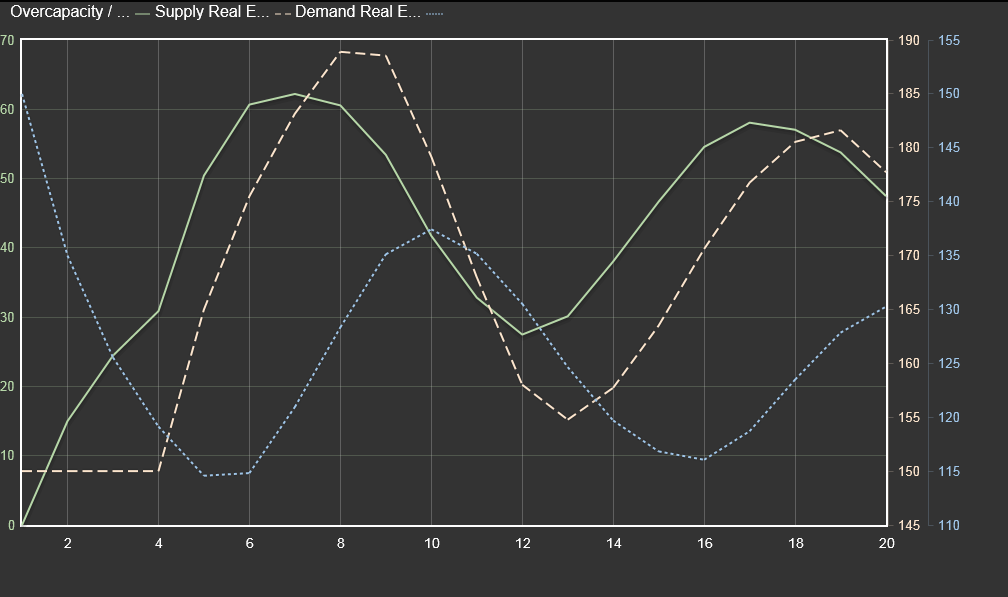 Our example demonstrates the cyclical behavior in the real estate market. The same mechanism of the model can be used for other sectors as well like business cycles in the airline market, transport market (shipping, infrastructure of ports etc.) or tourism (regional density of hotels) etc.

Model from perspective of factor Tragedy of the Commons

Individuals use a commonly available but limited resource solely on the basis of individual need/profits. At first they are rewared for using it; eventually, they get diminishing returns, which causes them to intensify their efforts. This may continue until the commons collapses.The commons in an organization is a resource (people, materials, space, tools, etc.) that is simultaneously made available to multiple people and/or teams. As each person or team increases their demands and expectations of the commons in the name of their own goals, the commons itself finds itself under steadily increasing pressure to perform while simultaneously feeling that its control over it own destiny steadily erodes toward collapse.


Results of our example:

A commonly available but limited grassland can be used by different sheepherder free of charge. In order to increase their own profits all sheepherder will add sheeps to the grassland regardless of the carrying capacity of the grassland ... 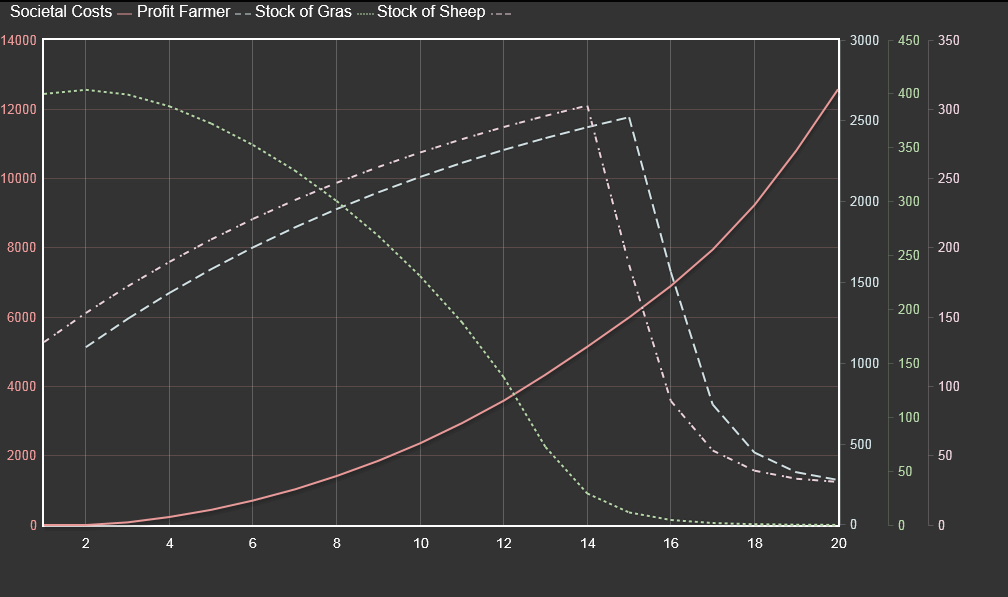 This will continue until the system collapses due to the overexploitation of the grassland. The result will be high societal costs.

This archetype states that a gap between a goal and an actual condition can be resolved in two ways: by lowering the goal (see balancing loop above), or by ... 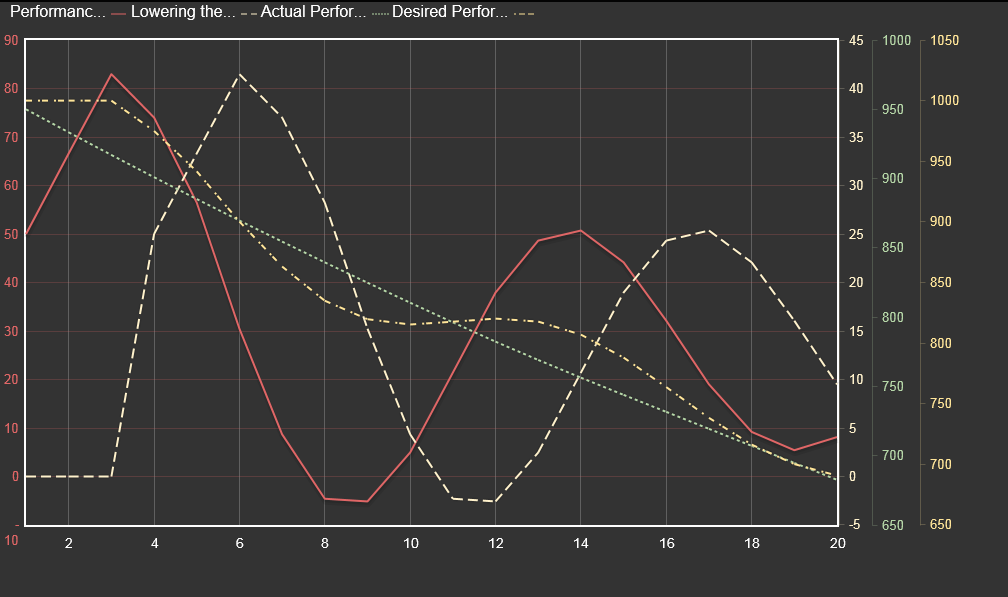 It hypothesizes that when there is a gap between a goal and a condition, the goal is lowered to close the gap in the short-term view. Over time, lowering the goal will deteriorate performance.

More examples: quality standards, objectives of the government like full employment, pollution control, protection of the environment, reduction of the budget deficit etc.

Model from perspective of factor Escalation

Short desription: Two competitors are fighting for the leadership (price war in our example - see figure above) without considerring the effects of their doing in a long-term view - ... 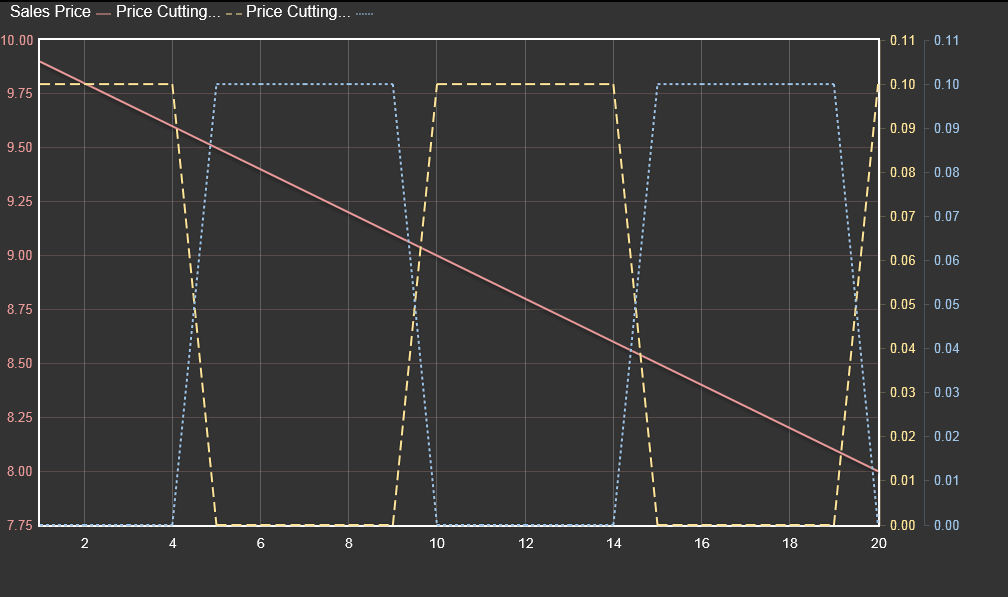 ... resulting in an escalation process harming or destroying their own interest. (sales price in our example - see figure above) The Escalation archetype presents an irony of management - in the name of protecting and/or furthering the best interests of their organization, managers engage in escalating behavior to the point where they harm their organizations and reduce the value to customers, stakeholders and shareholders.

Model from perspective of factor Prefering the Office

The Success to the Successful archetype describes the common practice of rewarding good performance with more resources in the expectation that performance will continue to improve. There is a belief that the successful (people, departments, products, etc.) have “earned” their increasing share of resources through past performance. The potential downside to this assumption is the continued under-performance of people, departments or products that perform at their current level through no intrinsic lack of skill or capability. 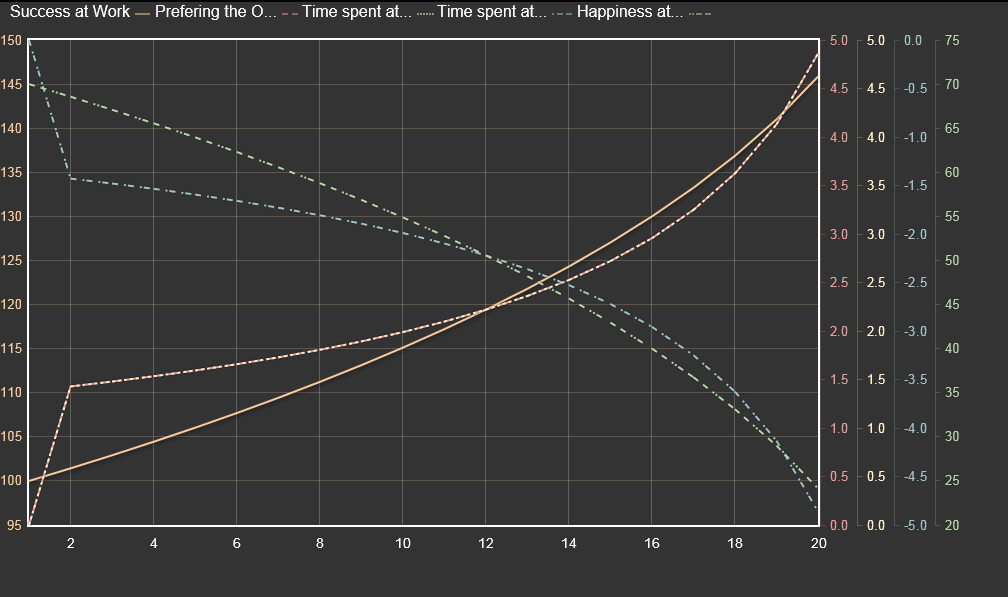 A business woman is spending more and more of her time at work resulting in a higher appreciation of her work and a lower happiness at home.

Model from perspective of factor Customer

Short description: This archetype states that a reinforcing process of accelerating growth or expansion (here acquisition of new customer) will encounter a balancing process (here support capacity) as the limit of that system is approached. 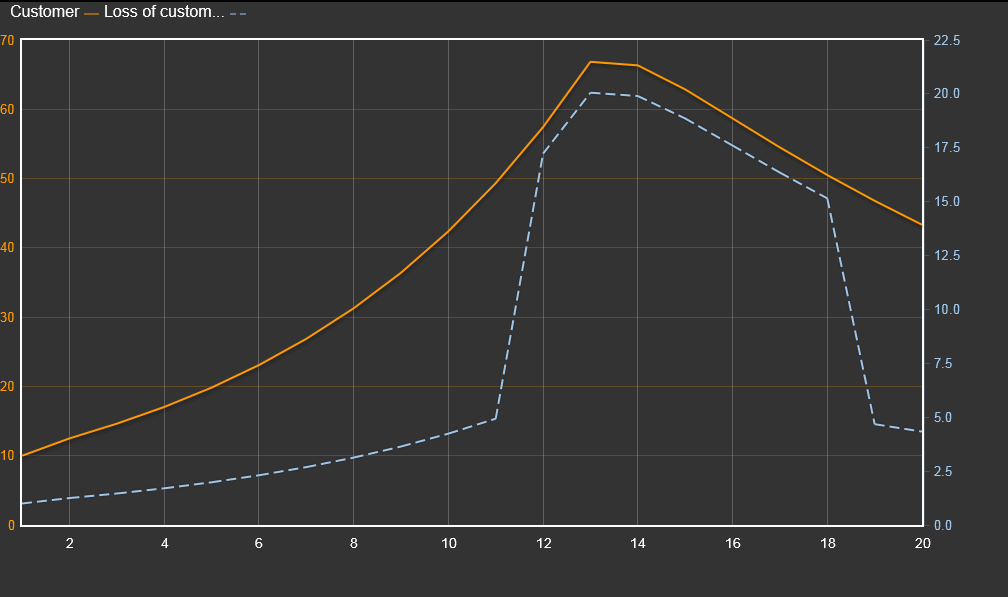 It hypothesizes that continuing efforts will produce diminishing returns as one approaches the limits - the support capacitiy in our example.

Model from perspective of factor How is it going to continue?

We would like to improve and add the "familiy tree of system archetypes". For this, we need your help and input. Please send us your comments, feedback, ideas, new archetypes and models: info@consideo.de

Thanks a lot. Yours CONSIDEO-TEAM